Tyson is all prepared for the Beyblade World Championship. The tournament is team-based and each team can have N members. A player can fight against a single-player only. Team G-Revolution is all excited and pumped up as they have practiced a lot. Kenny, the mind of team G-Revolution, has created a database where he has the data about the power of other teams members and his own team members. The tournament is going to start in some time and Kenny moves to the cafeteria to have a snack before the competition.

The team G-Revolution is to fight in some time and they are tensed up as someone has kidnapped Kenny from the cafeteria. They have made a police complaint and the police are searching for Kenny. Luckily, they have found his device with all the data. The problem is, the data is present randomly and not in the order they have to fight the opponent. Team G-Revolution wants to win at any cost and for that, they need the order in which they have to fight optimally to win the maximum number of battles.

The 3 players of both the teams are shown with their Beyblade powers.

Team G-Revolution is presented in the order: Tyson, Max, Ray

Team, All Starz is presented in the order: Michael, Eddy, Steve 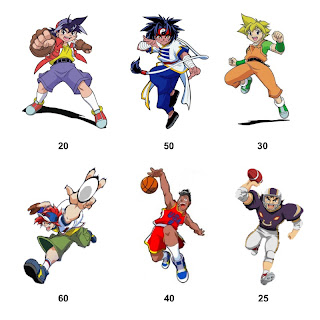 The maximum number of fights Team G-Revolution can win is 2 when they are arranged optimally or fight in an optimal order.

Team G-Revolution needs help with the device. Tyson has heard about your skills and called you up to help them shuffle their positions in an order such that they would be able to win the maximum number of fights. Can you help Tyson and Team G-Revolution?

How to solve this problem

Explanation of the problem statements

The problem said that there are two teams and we have to compete with this team with each other. And we have to given that the power of each of the power and have to fight with each other and that power is more then they win so we want to win. And our team is first so our task is to win the match from the opponent team.

The first line of input consists of the number of test cases, T

The first line of each test case consists of the number of members each team can have, N.

The second line of each test case consists of N space-separated integers representing the power of Beyblades of Team G-Revolution members.

The third line of each test case consists of N space-separated integers representing the power of Beyblades of opponent team members.

For each test case, print the maximum number of fights Team G-Revolution can win if they go to fight in an optimal manner.

How to solve this problem:

Solution:
In Python3 and JAVA8
In python3: