Let me explain the definition in simple manner.

6 ball can be divided by 3 and 2, but if you divided it by 2 then you can not further divide 3 to equal part, so you have to divide it by 3.

Now, you will have 3 group of 2 ball of each and move count will be 1.

You have to divide further to make it equal part.

So 2 will be divided in equal portion for 3 group and you will have 6 group of 1 ball and your move count is 3 and if you combine moves then your current final move will be: 3+1 = 4 and last join total ball count, which is 6 so your final answer will be 10

Now, Check my attempt, it is not fully giving desired result, but I will update this post further.
Quiz:

Jazzy is good with bowling but is not good with studies. His mom wants him to focus on studies too and for this she has found an interesting way. She has brought N packets of balls which may or may not have the same number of balls in them. The balls in a packet are arranged in a linear manner and Jazzy wants to play with the balls.

She will give the balls to Jazzy only if he can tell the maximum number of moves required in which he can get to play with all the balls. There are few conditions though:

Note: Dividing a single group into multiple groups of equal number is considered one move only.

Example: In a group there are 2 balls, then Jazzy cannot play with them until he further divides them into single-single units. 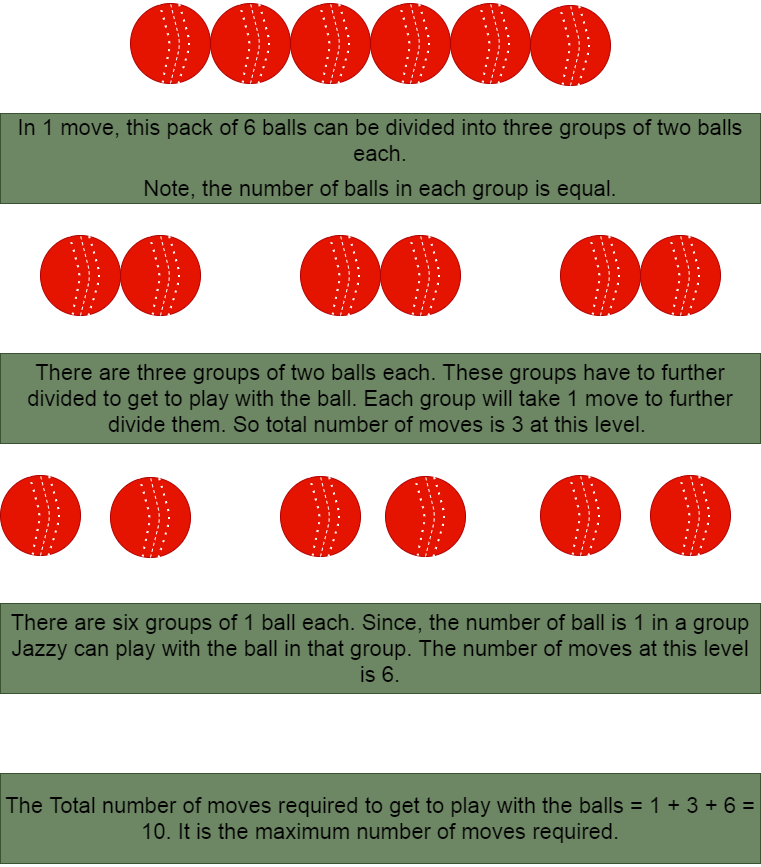 Jazzy only cares about playing with the balls and needs your help in finding the maximum number of moves. Can you help him?

Print the required number of maximum moves to get to play with the balls.

For 6 numbers of balls in a packet, 10 moves are required as explained above.

We have to solve this using binary methods.

It can only pass the test case, if any one know then please comment it.