Flow chart of while loop 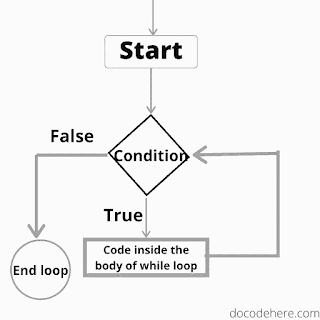 The basic python program of while loop

To understand the while loop, consider the following code.
Program:

Know some interesting things about the while loop

* In a while loop, a loop control variable should be initialized before the loop begins as an uninitialized variable cannot be used in an expression.
Code:
This created the problem if we don't create the value of p.
* The loop variable must be updated inside the body-of the while in a way that after some time the test -condition becomes false otherwise the loop will become an endless loop or infinite loop.
Code:
The output was endless because the loop variable value remains always 5, as its values not be updated, therefore the loop is endless.
The above code is an endless loop as the value of the loop variable is not being updated inside the loop body, hence it always remains 5 and the loop condition remains always true.
The corrected form of the above loop will be:

Both loops of python ( for loop and while loop) have an else clause, which is different form else of if-else statements. The else of a loop executes only when the lop ends normally. You'll learn in the next section that if a break statement is reached in the loop, while loop is terminated pre-maturely even if the test-condition is still true.
In order to fully understand the working of the loop-else clause, it will be needed to know about  working of break statements. Thus let us first talk about the break statement and then we'll get back to the loop-else clause again with an example.